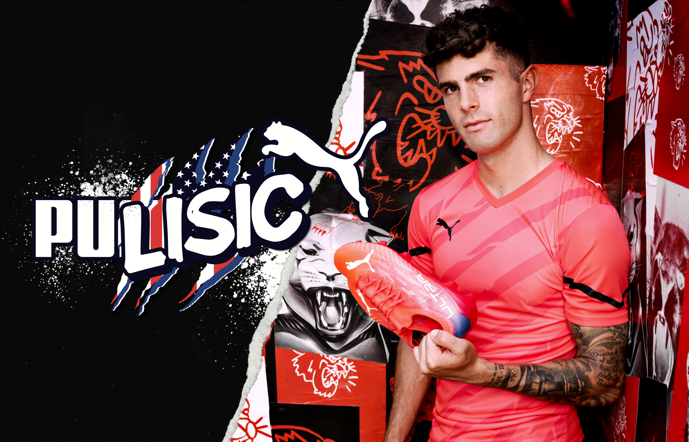 Young stars
The short answer is yes. As the most televised league across the planet, the EPL gets a brand in front of more eyes than any other. But any sportswear company should be smart in who they target to bring into the fold. PUMA’s endorsement strategy has varied over the years. In the 2010’s it seemed they were jettisoning the policy of signing Galacticos, preferring to sign promising younger players to long-term deals. That paid dividends with Marco Verratti and Antoine Griezmann who have enjoyed storied club and international careers since – but perhaps less so with Mario Balotelli, who’ll finish his PUMA contract in 2024 – likely not at a top club, and almost certainly far from the Italian national picture. However, bringing Christian Pulisic on board was a shrewd move for PUMA. At Chelsea, the American enjoys plenty of worldwide TV exposure, both in the EPL and in the Champions League. With his German connections, having played for Borussia Dortmund and been brought into the USMNT fold by Jürgen Klinsmann, he represents both PUMA’s brand heritage and soccer’s expansion into newer markets.

Qatar 2022
One strategy may be to target players whose national sides have already qualified for FIFA World Cup 2022, which will ensure a huge amount of exposure, and the EPL is well stocked with players who’ve already booked their tickets. England themselves have already qualified. So too, have Brazil, who’ll have EPL representation in Liverpool’s Alisson, Fabinho and Roberto Firmino. Manchester City duo Ederson and Gabriel Jesus and Leeds United’s Raphinha should also be in the seleção of 23 that coach Tite will take to Qatar. Perhaps signing a goalkeeper to a cleat deal might be an idea – cameras will often cut to feet when they’re launching a goal kick upfield – and Ederson is currently rumored to be unsponsored. With PUMA’s home nation of Germany also through, they could look at Pulisic’s Chelsea team-mates Antonio Rüdiger, Kai Havertz and Timo Werner who should feature for Die Mannschaft in Qatar and currently wear Nike, Nike and Adidas respectively.

Local heroes
With a nod to their core consumer base – the amateur and Sunday league player who’ve long been advocates of the KING for its traditional solid construction, there could also be value in targeting fan favorites. John McGinn’s all-action displays have established him as a cult hero for both Aston Villa and Scotland fans (and seen him linked with moves to Manchester United and Liverpool). Likewise, at 22 years old and with an England cap already, Conor Gallagher has shone on loan from Chelsea to Crystal Palace; who knows whether he’ll go on to establish himself at Stamford Bridge or move for a big transfer fee, but with both those midfielders currently wearing Nike, it may be an opportunity for PUMA to make a big move before they do.

PUMA are making some big moves. In La Liga, Barcelona and Netherlands attacker Memphis Depay joined PUMA recently and will sport the Ultra range. With Axel Witsel donning PUMA ONE in the Bundesliga for Borussia Dortmund, will the next big signing to wear the Future range join fellow ambassadors James Maddison and Allan Saint-Maximin in the English Premier League? Don’t bet against it.